Nigerians Under Attack In South Africa 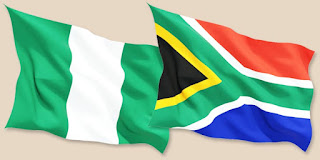 Nigerians living in South Africa are currently under attack at Mpumalamga area of the country.

This has been confirmed by Nigerian Citizens South Africa and Nigeria's Consular General to South Africa, according to a report by The Nation. The details of what caused the renewed attack is yet to be known.

This is coming few weeks after the Nigerian Government and South Africa had a meeting to address xenophobic attacks on Nigerians and other African migrants in the former apartheid nation.

#FreeNigeria Podcast launches with a meeting that hosts Matthew Hans-Bello.  #FreeNigeria Podcast is a Social and Political Equity Web recording set on enlighting youth in the Nation of Nigeria on the thinks and realities they should be done to improve and make a superior Nigeria.  The #FreeNigeria Digital recording is comprised of various Seasons and Scenes (with the principal scene simply propelling) and short talks called DriveBy.  It is a promising system that will be lighting up and fascinating as legislative issues and social bad form in Nigeria will be talked about and answers for these issues will be delivered.  Tune in to the main scene on SoundCloud, AudioMack or YouTube by Tapping the connection underneath https://linktr.ee/freenigeria
Read more